The Form of Transformations

The design activity is always an action of use/reuse of the place and its components, those present, at the moment of the activity, and those undertrack, no longer visible but still conditioning the present state of the place. The place is characterised by present and past modes of use, such modes of use can be summarised in Models of Use/Reuse, typical abstractions of the incessant process of transformation: models as "Form of Transformations".

The models are characterised by the Parts (Elements), understood as territorial organisms in themselves, interconnected by the system of connecting relationships.

The place is therefore interpreted as a landscape, understood as a structure, defined, according to the principles of Landscape Ecology, as "a system of interacting ecosystems in a given environment".

An interpretation of the morphological roles of Rome
A Masterplan for Ariccia (Rome)
Roma, Via Felice. From Sisto V to Paolo V
Monitoring of the evolution of the built environment and its recovery with the help of the GIS tool
PON SIT CALABRIA: Definition of a GIS of current evolutionary trends
CIRTER JOURNAL: The shape of transformations in the territory of Umbria

An interpretation of the morphological roles of Rome, from the late Republican era to the early Middle Ages (2nd century B.C., 7th century A.D.), investigated through the study of road layouts 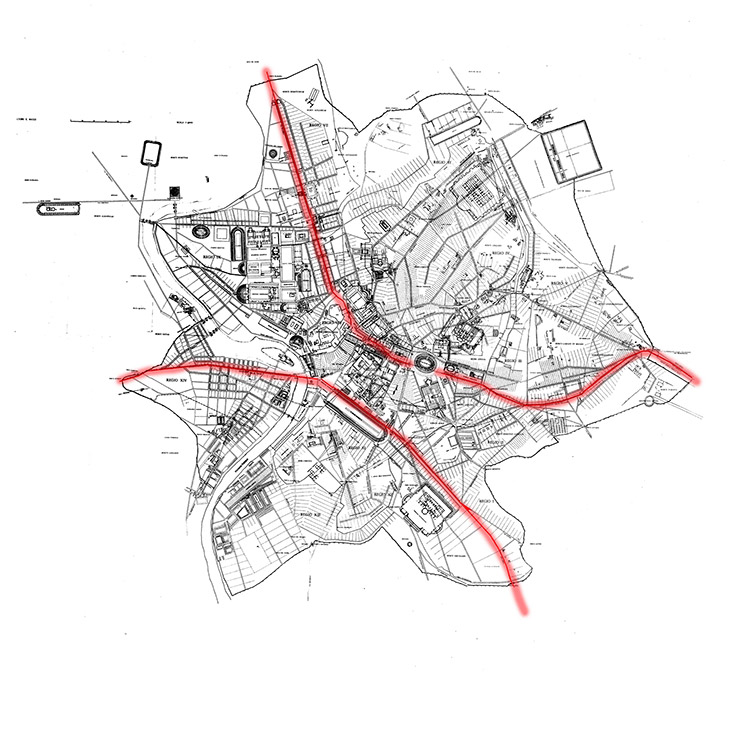 This work is based on a methodology for interpreting urban phenomena, based on the relationship of continuity and opposition that the road layout establishes with the historical structure of the city and its constituent elements, fabrics, nodes, emergencies.[1]

The territory and the city as a structure

The morphological reading of the territory and the city in its development along the time, allows through the diachronic analysis, to control the different figures that, acting on the territory, constitute its primary figurative values: the hydro orography and the anthropic transformations.

The hydro-orographic shape and the road system are integrated so that the orographic type - ridge, hillside, valley floor - automatically becomes the road and settlement type.[2]

Analysis of forms and transformations

The analysis of the forms present in the territory at the various scales, the interactions between them, make it possible to relate parts and functions of the territory in the dimension of Structure, a structure of interdependencies endowed with the specific conditions of identity and self-regulation. The historical structures are read diachronically in their incessant process of transformation and synchronically as a complex form resulting from superimposition. Form is conceived as a limit state of continuous processes of transformation. The structural interpretation of the territory and the city leads its themes back to those of development (diachronic dimension), Form (synchronic dimension) and interchange (functioning).

Rome and the role of the city-territory relationship

The oldest systems of routes and settlement systems on the peninsular ridge are present in Rome with the Etruscan Ridge System and the Latin-Italic Ridge System, which converge at the ford on the Tiber that gave rise to Rome.

In the first phase of the genesis of the urban structure, a system of radial centres was defined, facing the valley of the Tiber, connected by streets named after the centres themselves: Nomentana, Tiburtina, Gabina, Prenestina, Labicana, Tuscolana, Ardeatina, Laurentina.[3]

The close connection between place structure and urban morphology generates a typical resulting morphology. From the beginning, a hierarchy of routes was established: those on the ridge were of exclusive local relevance, while those on the valley floor were of local relevance when, together with the ridge routes, they generated the road junctions at the entrance to the settled area, and those of territorial relevance when they constituted the interchange structures between the various Etruscan, Latin and Sabine populations.

The structure described is progressively consolidated from the royal age to the imperial age.

The historical layout of the city up to the present day is largely the one that was consolidated with the model of use of the late imperial city, a layout that has remained almost unchanged in its "form", even if its functionality has in part declined.

The typical form of the city:

From the origins, until the imperial age, the radial routes of the consular roads tended to connect progressively in a wide coordinated system. In particular, the eastern radial routes (Salaria, Nomentana, Tiburtina, Prenestina) were connected in a fan whose edges were formed, to the north, first by the via Salaria, in the royal period, and then by the via Flaminia-Cassia and the via Labicana-Campana (Casilina), to the east.

To the west, the system - made up of the Etruscan routes arriving at the ford on the Tiber and then merging into the final stretch of the Via Aurelia and the route of the Latin populations, the Via Latina, later downgraded by the construction of the Via Appia - was strengthened, linking the other routes connecting the city with the sea (Portuense, Magliana, Ostiense, Ardeatina). The two primary systems, western and eastern, pertaining to the vast area (they are road systems consisting of routes that reach the borders of the empire: Cassia Flaminia Casilina Aurelia and Appia), tighten the system of the Forums, giving rise to an overall structure with a double 'hyperbola' that constitutes the typical shape of the city.[This form creates an effective relationship between the territorial road system and the urban system of the central areas, i.e. the 'open' system of the Forums, which underlines the territorial dimension of the city. The form thus identified lapses in the Middle Ages; however, even if it is used differently, the urban road structure substantially maintains its original layout until the urban intervention of Sixtus V, who, in extreme synthesis, replicates the system of the double hyperbola with the terms and the basilica of Santa Maria Maggiore at its centre.[5]

A Master Plan for Ariccia

The master plan of the town of Ariccia is based on the principles of sustainable development, hystorical configuration of the territory an uniform application of rules governing exsisting buildings 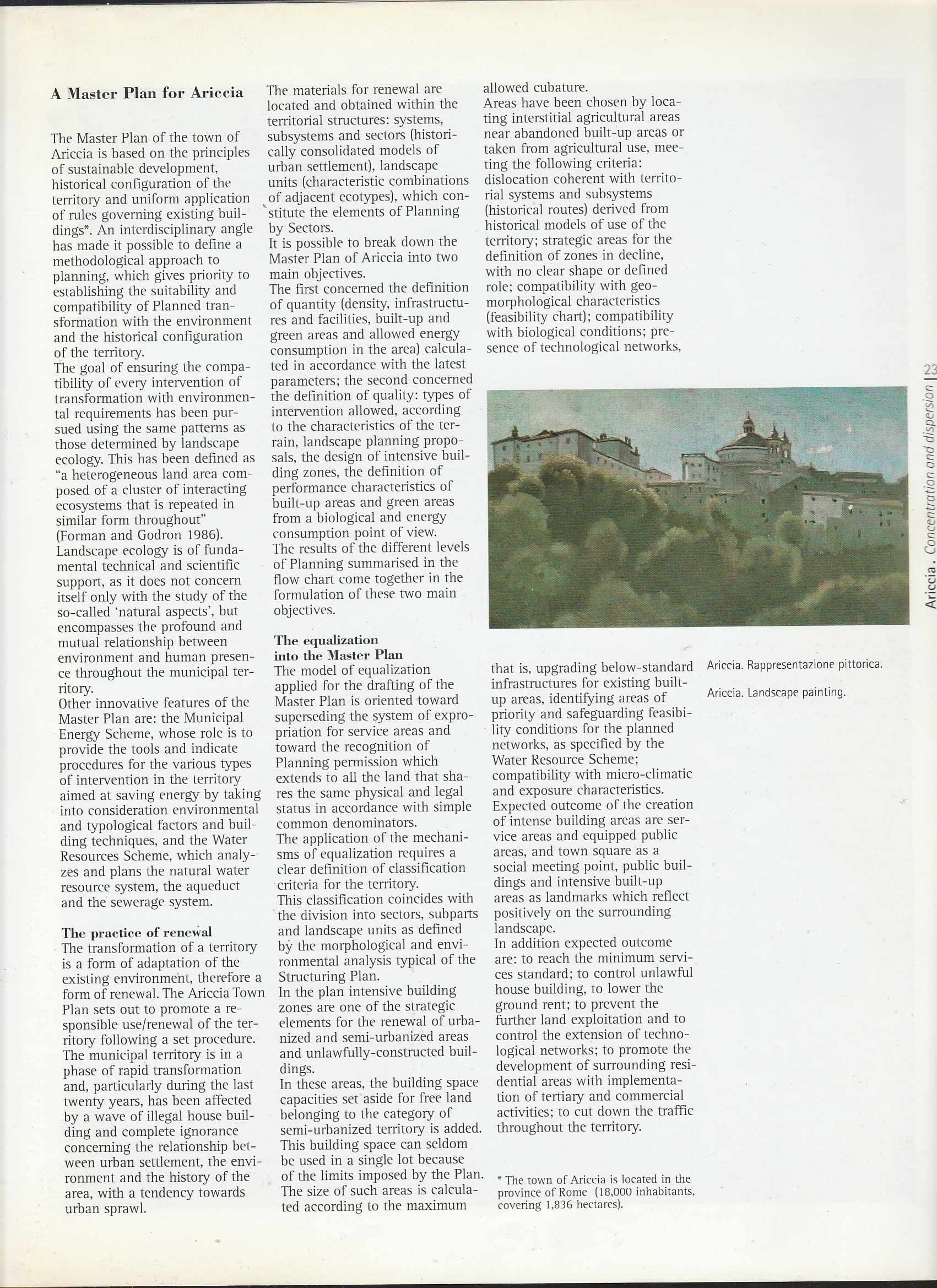 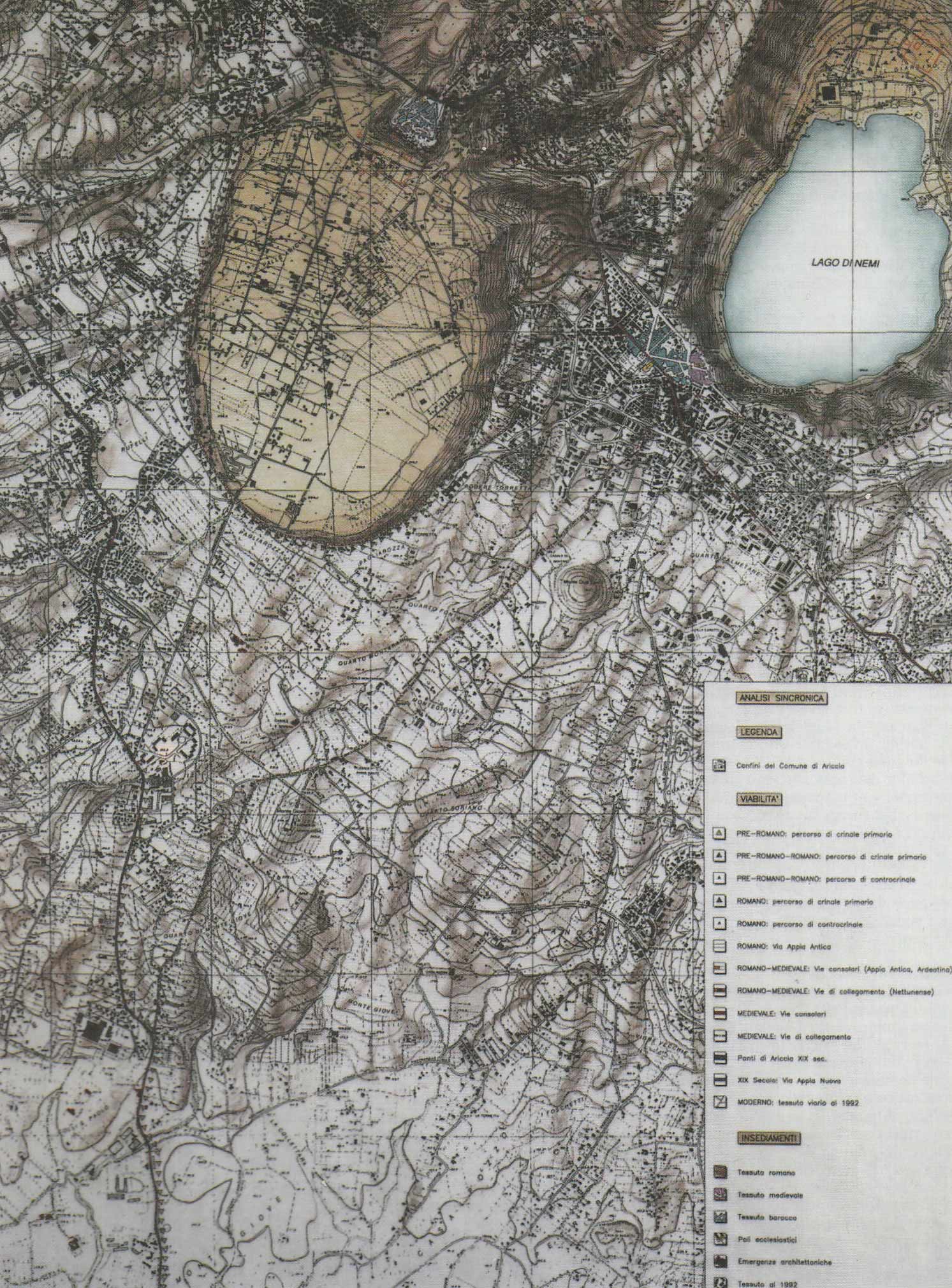 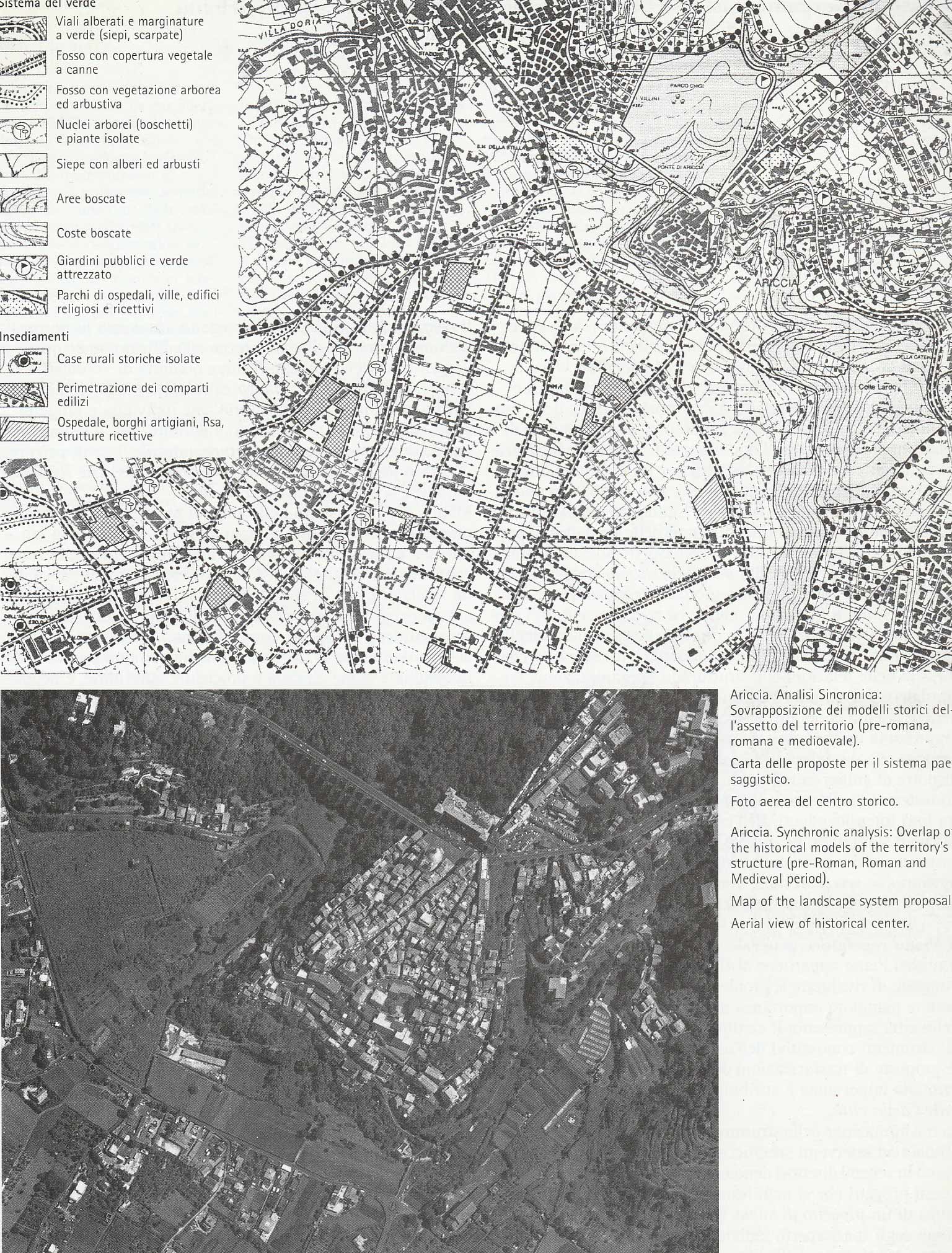 Roma, Via Felice. From Sisto V to Paolo V

The book Roma, via Felice da Sisto V a Paolo V, examines the vineyards of the Quirinale and the Pincio, affected by the opening of the Via Felice sistina in 1586. The unpublished notarial documents, the basic material for this study, mainly concern three properties affected by the profound transformation processes induced by the important event of the construction of the Via Felice in the urban history of Rome: the Grimani and Mattei vineyards, both at the Quirinale, and the Ferri-Orsini vineyard on the Pincio. Other properties are marginally affected by the study: the Ubaldini vineyard, the Sforza vineyard and palace, later Barberini, and the Este vineyard. From the analysis of notarial documents and other sources it is possible to derive a wealth of information useful for describing an important moment in the process of transforming the city of Rome. This study highlights in particular the ways in which land was parcelled out, the genesis of a new road system, the growth of a new building fabric, the subjects involved in this transformation process and, finally, the values of land and property rent in a newly expanding sector of the city. The study also highlights the relationship between the papal urban development programmes and private investment in the city, with the aim of integrating the history of the 'minor' building fabric with the well-known history of the city's major urban and architectural interventions. 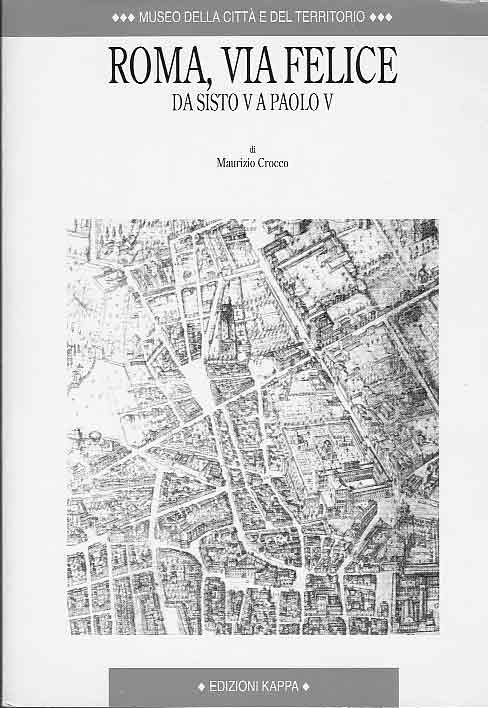 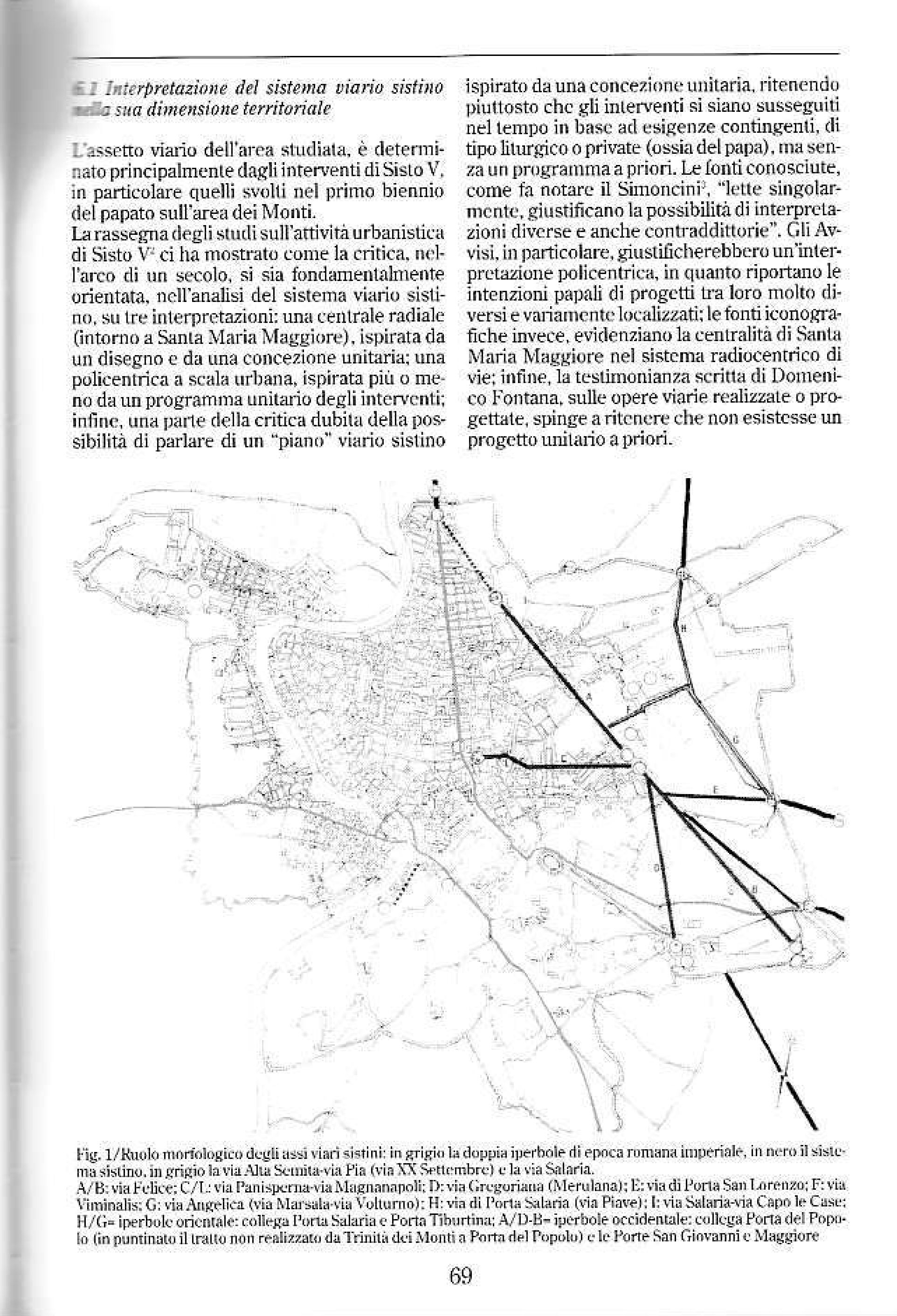 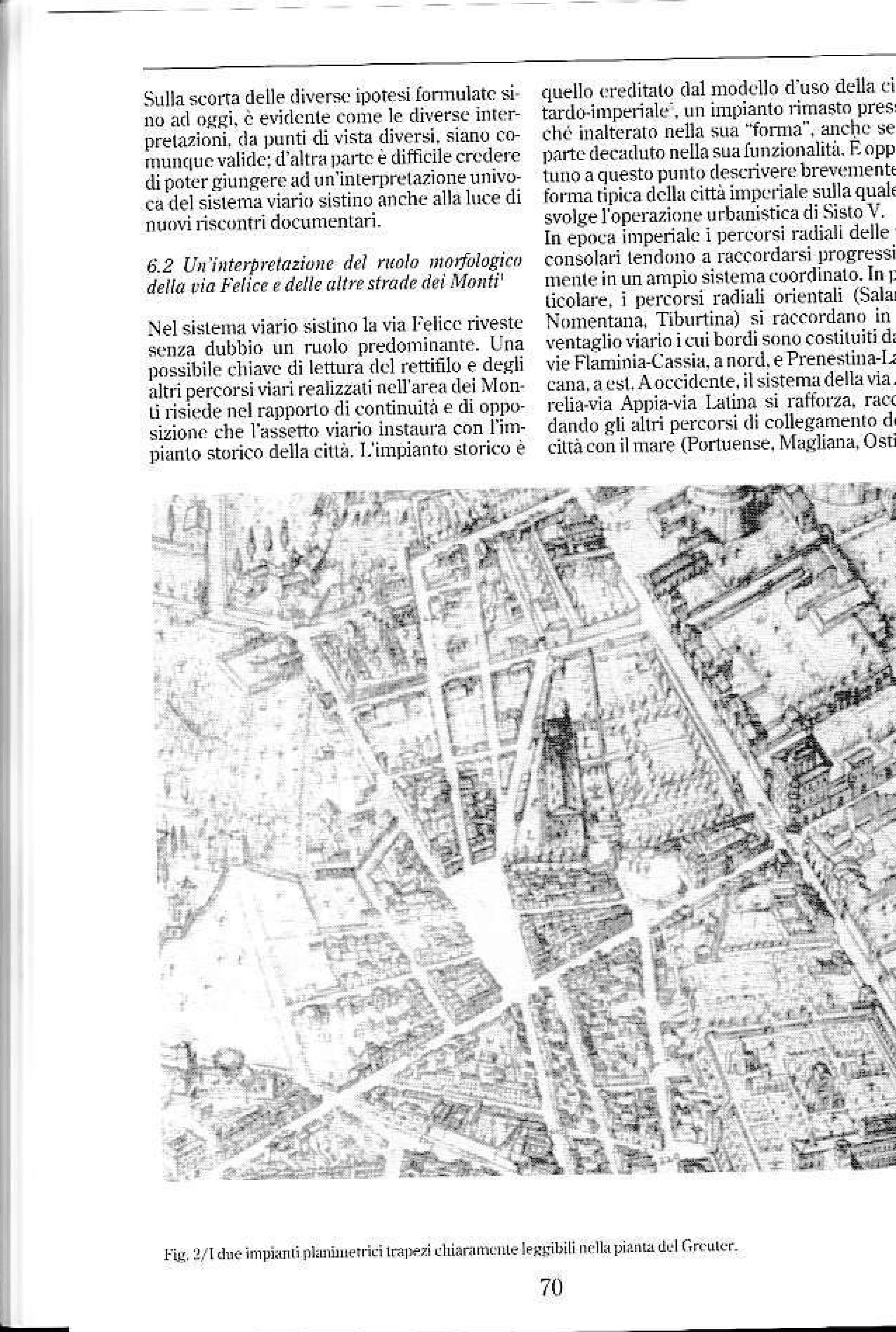 The paper proposes the application, at an extra-municipal level, of a methodology based on the principles of development rights and on the historical morphological analysis of the territory. Using the GIS tool that allows monitoring the evolution of the building, it can deal the territory towards less environmental impact forms and allow access to network services and mobility. The methodology used by the authors in their contribution to the drafting of the PTPG of Latina and Viterbo allowed the classification of soils for the purpose of development rights of the provincial level that is propaedeutic to the territory restore that is characterized by widespread forms of settlement and often spontaneous. Note: paragraph 2 is edited by F. Paolo Di Giacomo; paragraphs 5.3 and 5.4 were handled by both authors; The remaining paragraphs are edited by Maurizio Crocco. 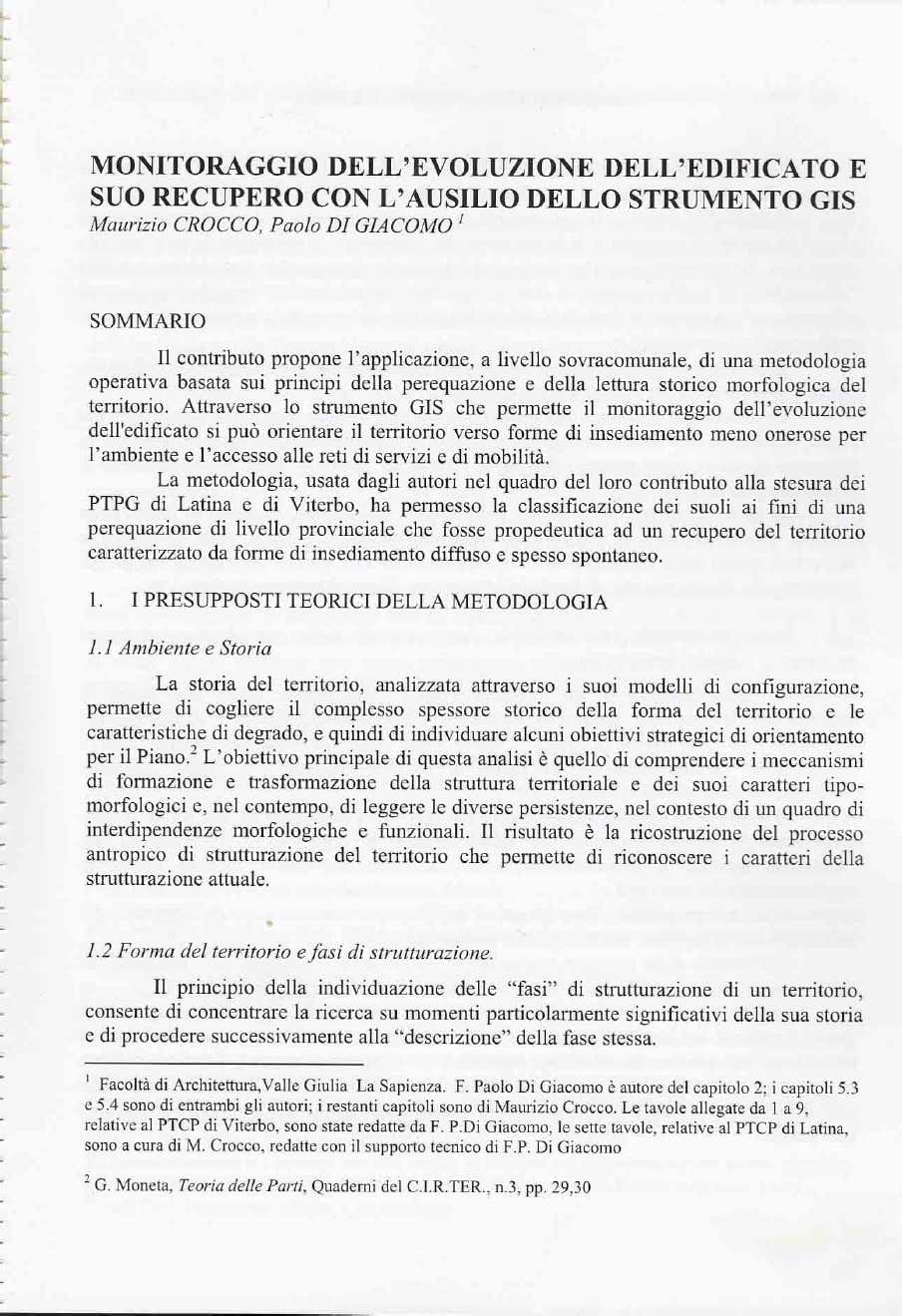 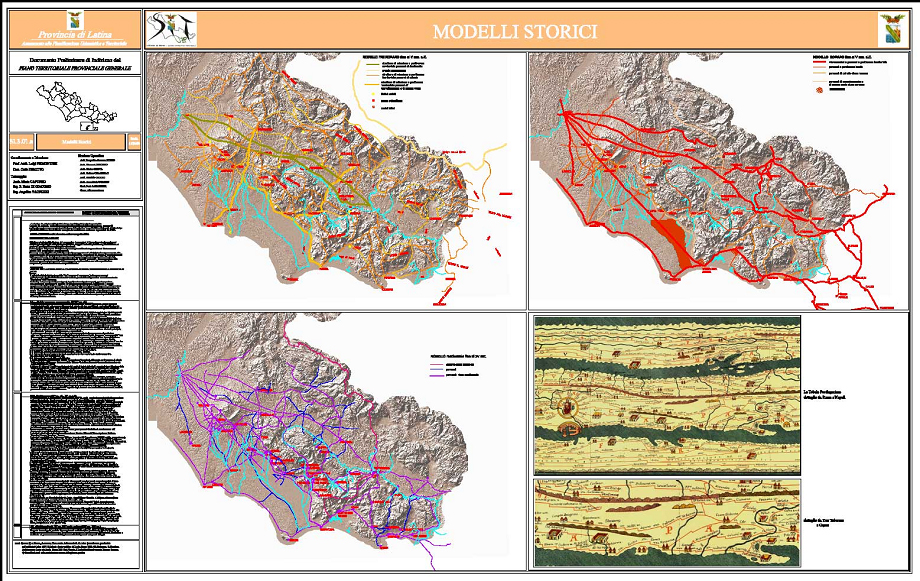 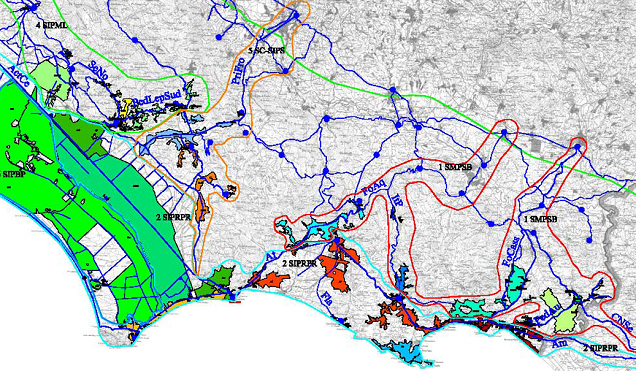 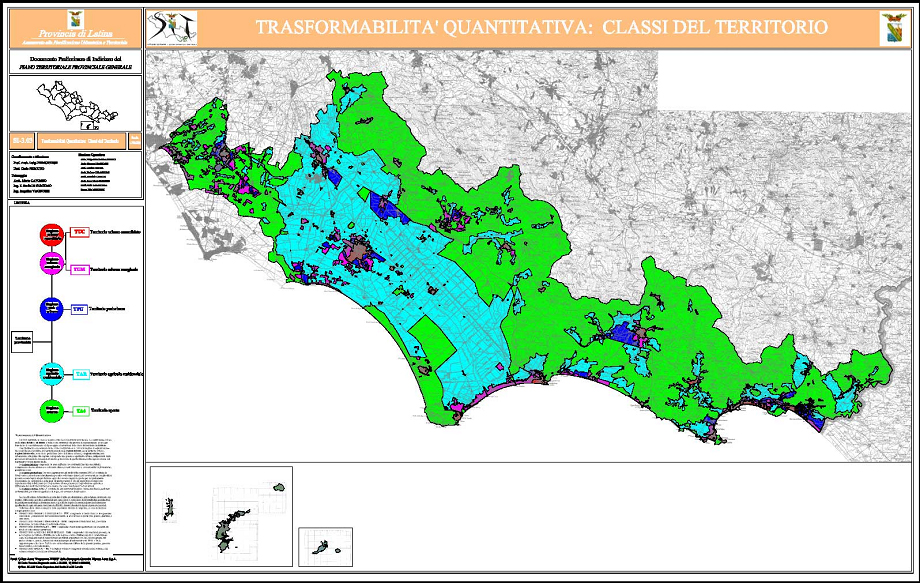 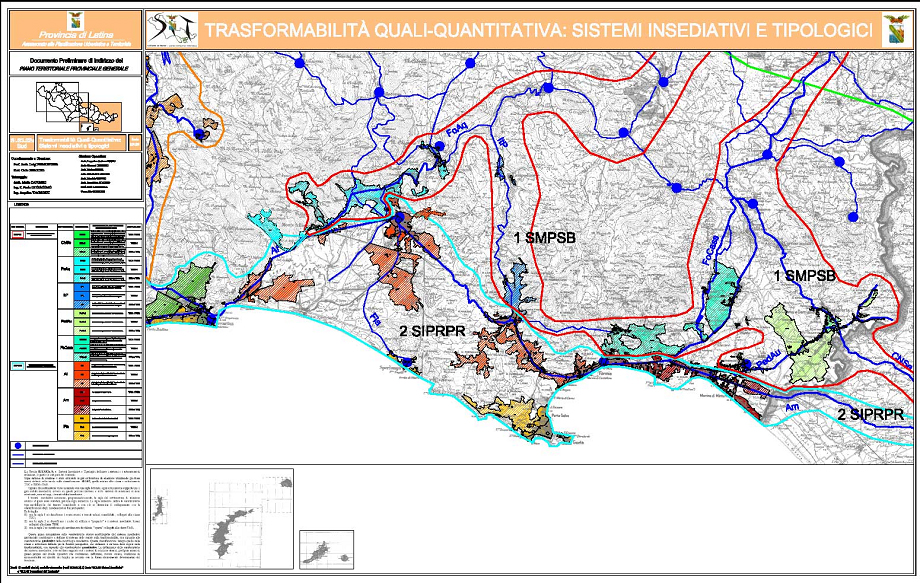 READING THE HISTORICAL PATTERNS OF THE TERRITORY

The reading of the historical models of the territory takes into account their relationship with the original landscape and the various transformations that have taken place, i.e. the landscape is understood here as the place of the transformations.

The history of the territory, analysed through the succession of its "configuration models", makes it possible to grasp the complex historical depth of the form of the territory and the characteristics of degradation of the relative values and, therefore, to identify some strategic objectives that converge and orient the forecasts of the urban plans.

First of all, the 1888 IGM cartography at a scale of 1:100,000 was adopted as the basic cartography to study the various "configuration models" of the territory.

This base provides an immediate image of the "natural structure" which is configured as the primordial matrix within which the lines of anthropic penetration of the area and the dislocation of the various polarities are explained.

In particular, the following have been analysed

The synchronic analysis re-proposes the themes developed in the previous section, "Reading the historical models of the territory", at the scale of subsystems and parts and tends to identify the current and tendential (spontaneous) "form" of the re-use of the territory with the superimposition of the most significant structural systems and subsystems, i.e. the historical models of the diachronic analysis,

This study subdivides the territory under examination into classes and relative subclasses. The subdivision is based on the de facto and legal status and on the structural choice which foresees the maintenance of agro-forestry uses or the consolidation and passage to urban uses of the classes of land identified. The classification of the territory is useful to determine, already at the stage of drafting structural plans, a specific potential building regime for each class and sub-class (quantitative transformability), while the morphological partition determines specific qualitative preservation-transformation rules for each sub-part

The history of the territory, analysed through the succession of its configuration models, makes it possible to grasp the complex historical depth of the form of the territory and the characteristics of the degradation of these values and, therefore, to identify some strategic objectives that flow into and guide the forecasts of the urban plans. The analysis of qualitative transformability has led to the identification of three systems of relations with territorial relevance, i.e. parts of the territory by comparing and overlapping the maps of Historical Models

In the type-morphological analysis and in the Environmental System Study, the territory of Sila Greca is divided into Parts and corresponding Landscape Units.

Each of the Parts of the territory, considered as a type-morphological unit of the settlement system, is treated in the perspective of an affirmation of its "form and roles" characters, of its relations with the other Parts through the systems and subsystems of relations and the structuring green system.

Also the verification of services is carried out within the single Parts in relation to classes of services that, in the programmatic choices of the planning, are considered pertinent to the single part.

The planning by Parts foresees for them a section of directives with forecasts concerning the morpho-typological order of the settlement system, the infrastructural functional system and the reorganization of the ecological characteristics of the Part. 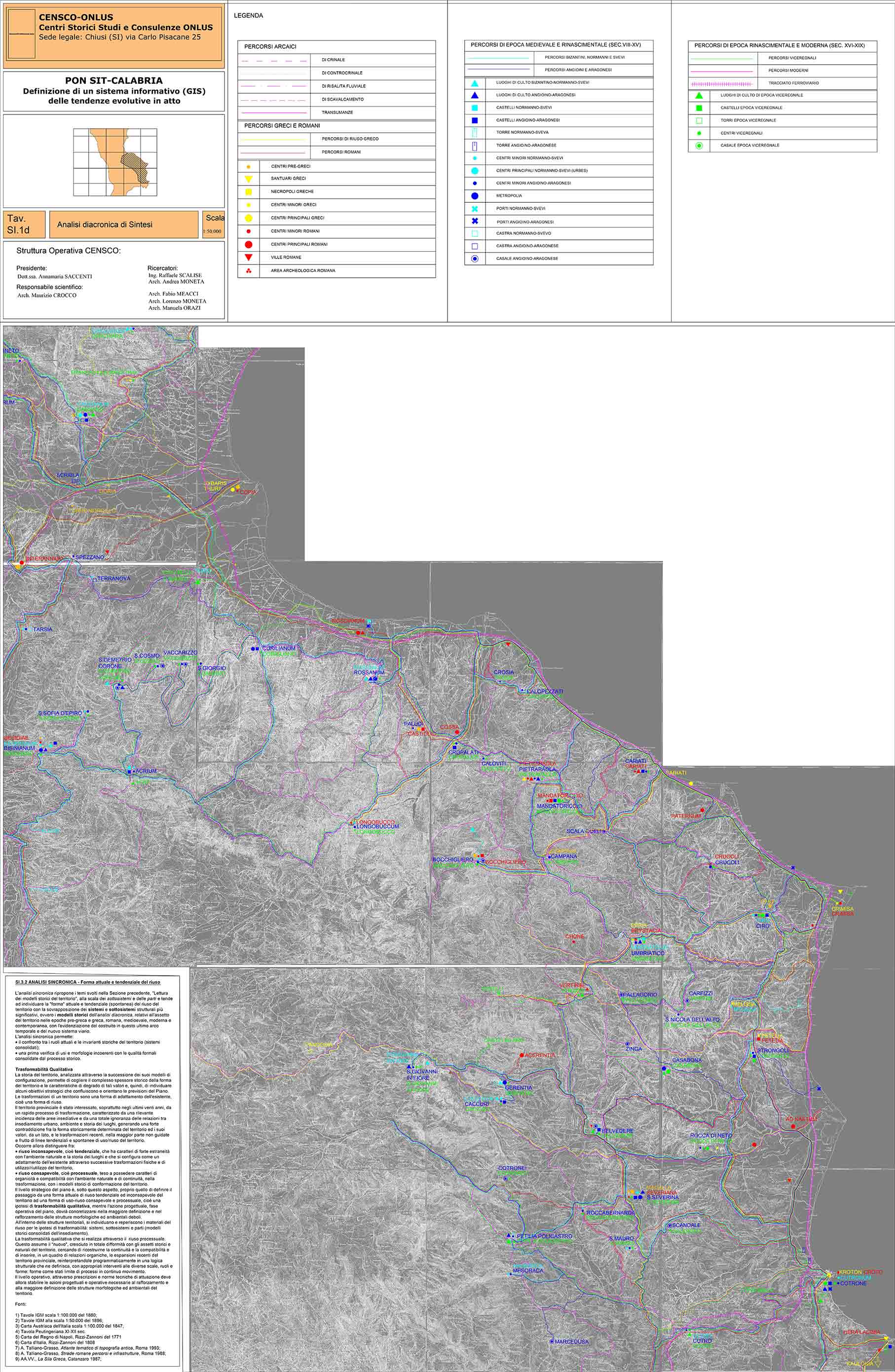 THE SHAPE OF TRANSFORMATIONS IN THE TERRITORY OF UMBRIA 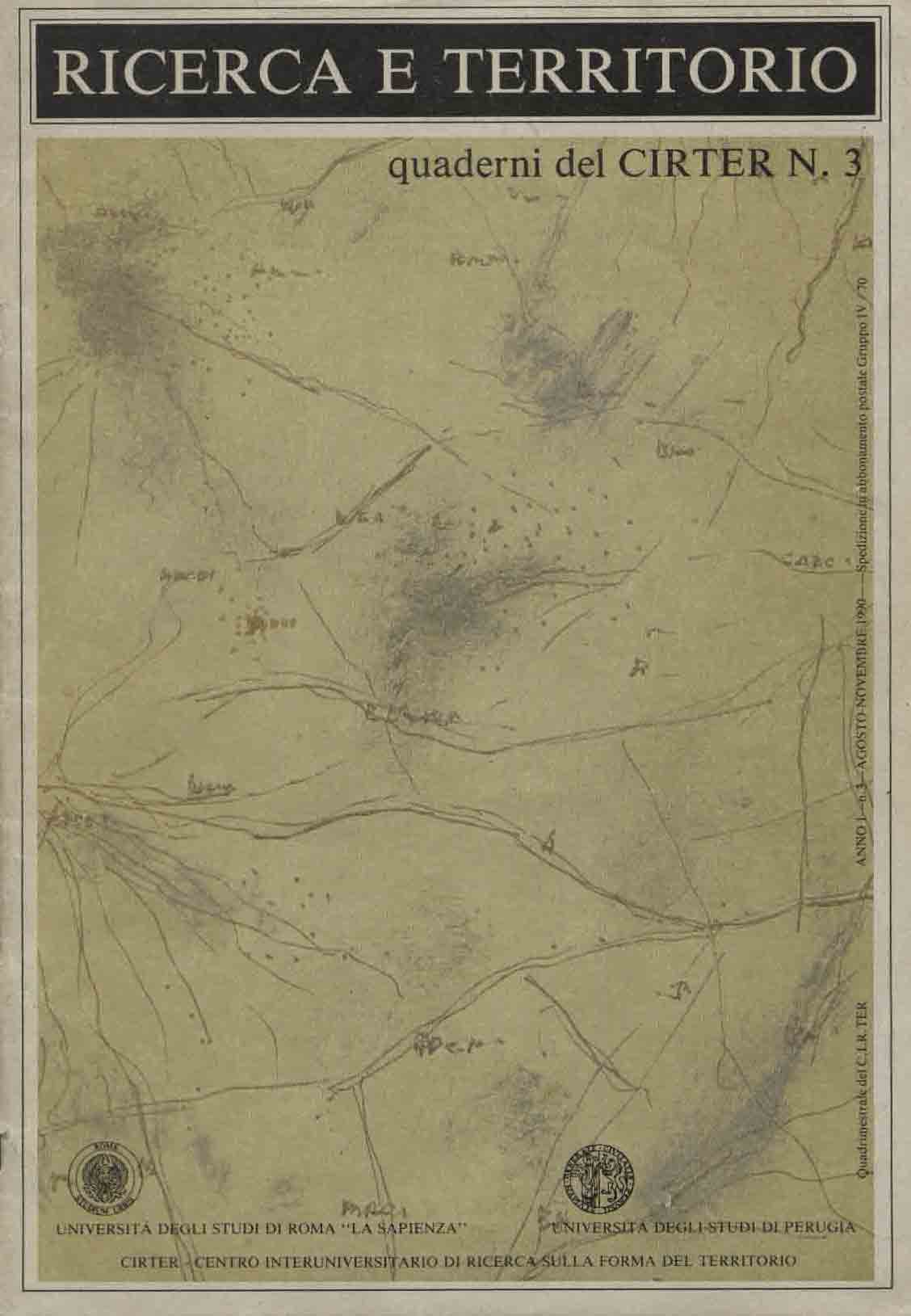 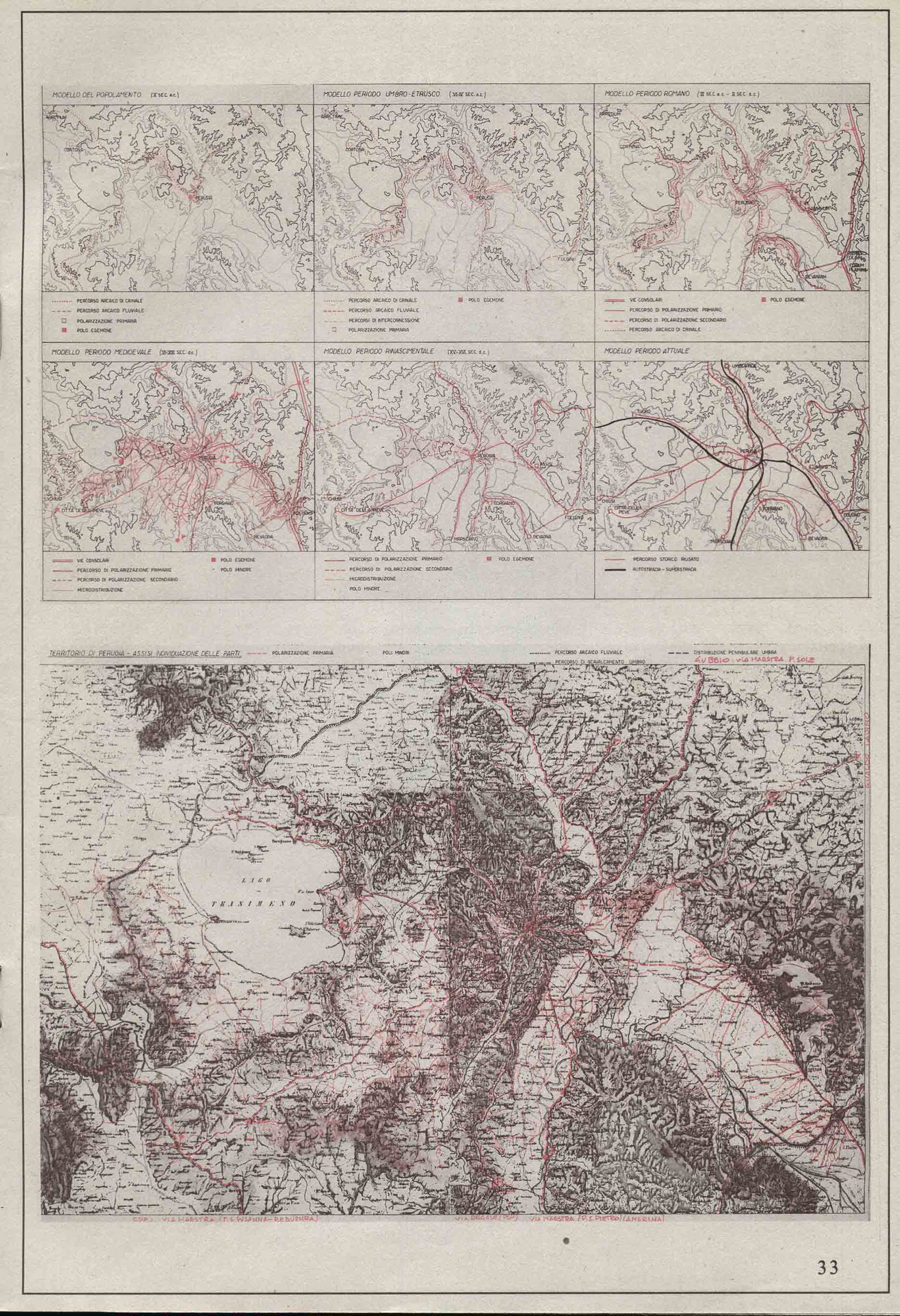 i want a website like this
Ucraft is a free website builder that provides web designers, marketers and business owners with a set of web design tools to start their next awesome project in minutes. No coding or designer skills needed. Go to Ucraft